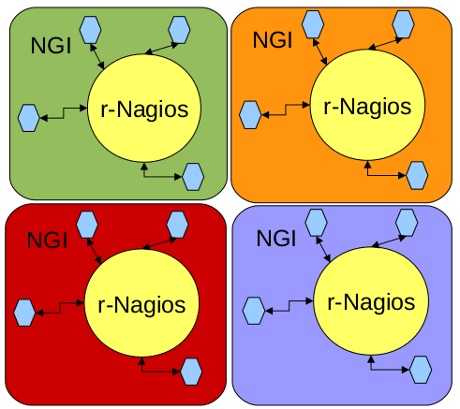 SAM as an NGI instance

The current operations model forces that each NGI must deploy and operate their own Service Availability Monitoring (SAM) system to monitor the fraction of EGI production infrastructure under their scope. SAM currently includes the following components:

Each SAM instance triggers the execution of probes in grid sites under their scope. The present list of probes includes: 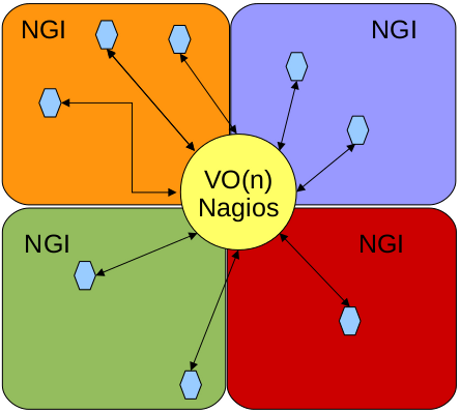 SAM as a VO instance

The main idea is to profit from the SAM service in use for EGI operations and adapted it to monitor the resources from a VO, or from multiple VOs, using the same SAM instance.

One of the most obvious advantages of this service is that a VO can then develop and integrate their own probes. While EGI operation teams test and monitor the status of resources through generic tests, they can be considered insufficient for certain communities. These approach allows those communities to define custom test suites and insert them in their SAM system.

In order to acomplish this multi-VO monitoring role, the SAM service instance has to be properly adapted:

The following section will depict how to install and properly configure a Service Availability Monitoring System for VOs.

What is the VO SAM?

The VO SAM service is an adaptation of the operation SAM service used by NGIs. It is useful to monitor VO/VRC infrastructures within a given NGI or groups of NGIs.

Who can run the VO SAM?

The VO SAM was delivered so that VRCs (or VOs associated to a VRC) could assume the operation of the service. This should be the most optimal scenario since it provides full independency for the VRC / VO to configure the service according to VO needs (as for example, integration of new VO specific probes). Nevertheless, the delegation of the service operation to a third party entity is not excluded.

Which services interoperate with VO SAM?

The VO SAM interoperates with the following middleware components which have to be declared at configuration time:

The WMS and the central SE must support the VOs in cause. The best case scenario is that the VO uses dedicated instances of the previous services for their SAM system since nagios tests will induce high load peaks. The alternative is to use services at disposal of the VO but shared by all VO users (and probably, by other VOs also). The information regarding those services endpoints are available through informations system queries from any user interface:

Case the VO is unable to provide their own instances of those services, the VRCs may trigger the formal links established between VRCs and NGIs, contemplated by the VRC approval process, and agreed at the VRC aproval time. This provides direct opportunities to find service providers for VRCs, and for any VO which is associated to a VRC.

The VO SAM will be a service with high load peaks specially at job submission times. The system requirements have to be chosen according to the number of sites to be monitored under each VO, and the number of VO to be included in the same VO SAM box. Therefore, as a minimum requirement, we suggest:

The system requirements may increase according to the VOs infrastructure to be monitored.

To get an overview of the service, in terms of

Install and configure SAM with YAIM

There are two alternative ways to configure a VO SAM.

and ensure that similar entries are defined in /etc/ncg/ncg.conf

Right now it is pretty tricky to include VO specific probes. The first step is to learn how a nagios probe must be developed. A tutorial is available here:

Afterwards, the VO would have to define their own profile in /usr/lib/perl5/vendor_perl/5.8.5/NCG/LocalMetrics/Hash_local.pm in the same way as other profiles exist in /usr/lib/perl5/vendor_perl/5.8.5/NCG/LocalMetrics/Hash.pm. To understand the atributes, flags and static file rules which are used in previous perl module, please consult:

Finally, in the Yaim configuration you would need to point to the new profile:

In case of multiple-VO instance where each VO has its own profile config would be: