MDavid I think "Emergency Releases" should also start from GGUS tickets, we will have to check if this is to much overhead, but the urgency of it can be already in "High priority" in ggus

MDavid this should be evaluated in a case by case basis, I was planing that it may go through a very fast staged rollout.

Existing field. Takes the general RT status of the ticket.

The RolloutProgress reflects both the phases of the SW release workflow, and the final outcome.

This field holds a link to the report of the QC verification process.

This field holds a link to the consolidated report summarising individual reports of all EAs.

Holds the currently valid URL to download the installation package. So, if the ticket has the current RolloutProgress of "StageRollout" (or equivalent), the URL should point to the package in the StageRollout repository.

This "field" I envision not really a field, but an attachment to the ticket that holds the XML data for the release referred to in this ticket. Didn't know how to describe it. For better automation the attachment should always have the same name (for example, "release.xml") and be attached throught the WS integration with GGUS (if possible).

The contents of this XML file is currently under discussion, so I will not drill into it right now.

The owner of the ticket should change from person to person, depending on the progress through the workflow. I am not a fan of assigning the ticket to a group of people, as this often leads to confusion as to who should pick up the ticket. For now I would like to see group leaders, such as the Task leaders for QC verification (TSA2.3, Carlos Fernandez), and the Task Leader for SR (TSA1.3, Mario David) as standing assignees who then delegate the work appropriately, and collect and consolidate the reports (see other custom fields, and workflow comments).

MDavid Agree, and that is what I thought initially.

I would like a list of watchers added to the tickets to ensure proper monitoring. Again, I think the task leaders for QC verification and SR are mandatory watchers, as well as the task leader for repository management (TSA2.4, Kostas). I also would want the members of said tasks (TSA2.4 and TSA2.3 in particular) as watchers. The activity leader for SA2 (currently me, Michel) should be a mandatory watcher as well.

I am thinking of the task leader of TSA2.5, Michael, to also watch this queue as to give the DMSU a forecast on what is in the current pipeline of patches that may be rolled out into production.

I also would like to include the group of early adopters in SR to be watchers, to get their heads up for what's going on. But that needs more discussion that perhaps Mario David may lead.

MDavid early-adopters-XXX should be notified when the status passes to -> "StageRollout". Since watchers are individuals, I think we will need some field that when set (somehow) triggers a notification mail to the respective mlist, now maybe a tricky part is then that only the ones accepting the staged rollout will be included as watchers.

Provides the association of the given release, with a higher level "object" (i.e. "Major release" or even a "Software"). This object should be characterized by a set of static/agreed attributes.

For example, the location on the production repository, where each release associated with an "object" should be populated.

RollOutProgress has the following States

Two New States to be added. Both will work exactly as Rejected but recorded with different semantics as follows.

Note: When ignoring, rejecting, or not publishing a product, the RT ticket has to be resolved. 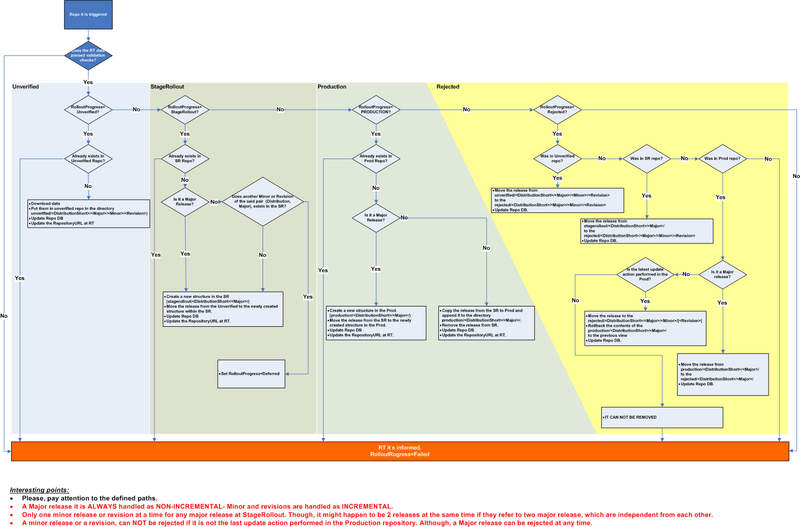 After testing of the notification mechanisms we (Marios and me) have realized that we are not completely sure who should be notified when during the ticket lifespan. Current implementation follows our discussions during December. Respective groups are added as ticket CCs when the Repo returns CommunicationStatus equal to OK and the RolloutProgress is as depicted in the table below. Note that the sw-rel-admin is always notified as AdminCcs of all changes for the tickets in the sw-rel queue.

The notification mechanism works nicely. However, we have realized that the table above is probably not sufficient and we might want to have a full matrix of RolloutProgress states and groups to be notified. That would be probably implemented by purging the CCs on each CommunicationStatus == OK && RolloutProgress change and adding the groups from scratch, but this is not a big deal from the imlpementation point of view.

A post API has been developed in order to receive post commands originated from the EGI RT system. The information required is: Ticket_Id, Current_Rollout_Progress, Previous_Rollout_Progress and a Yes/No flag that indicates whether it is an Emergency_Release or not. The API has the appropriate functionality to:

The Repo system (lets call it Repo daemon) it is responsible to:

NOTE: The unverified area/repository it is not in a public view, it requires an EGI SSO account for accessing it.

Metrics for the REPO

Metrics from SLA with TPs

Questions from the Developers